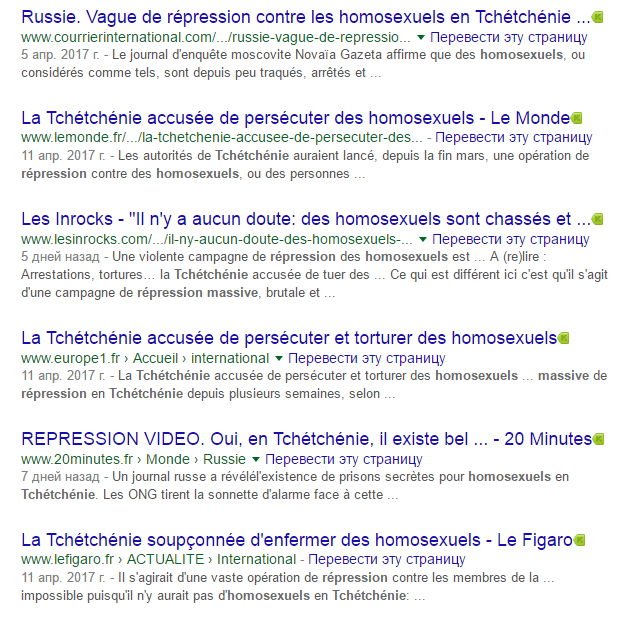 “The Western and European special services over the years did every possible and impossible thing to destroy Russia as a sovereign state. They chose the Chechen Republic as the stage for their game”.

--------------------------------------------
The propaganda war against Russia continues, and what better way to poison western minds against Putin and Russia than to play the LGBT persecution card.
http://theduran.com/nikki-haley-says-america-will-not-ignore-unverified-reports-that-chechnya-is-persecuting-suspected-gay-men/
“We continue to be disturbed by reports of kidnapping, torture and murder of people in Chechnya based on their sexual orientation and those persecuted by association.”
“If true, this violation of human rights cannot be ignored – Chechen authorities must immediately investigate these allegations, hold everyone involved accountable, and take steps to prevent future abuses.”

CHECHNYA. The NYT, quoting Novaya Gazeta, had this story: “Chechen Authorities Arresting and Killing Gay Men, Russian Paper Says“. Mark Ames, who holds to a quaint belief in the value of research, tells us this about the source. Hmmm…. НГ, NYT and Alekseyev. Not very reliable sources say I.
https://patrickarmstrong.ca

...So finally the Novaya Gazeta correspondent asked Alekseyev straight up: Is he aware that his gay parade petitions incited local investigations in the North Caucasus against LGBT activists—leading to mass arrests and murders in Chechnya?

Alekseyev answered by accusing the Novaya Gazeta reporter of “speculating in unsubstantiated information, acting on baseless rumors, and he personally knew nothing about alleged persecutions that had anything to do with what he’d done.”

Novaya Gazeta, whose reporters have been at the forefront of the fight for gay rights in Russia, concluded that at the very least, Alekseyev was guilty of incredible negligence for not taking the local culture into account—and the lives of local gays in the North Caucasus. At the end of the article, they noted that other Russian LGBT groups were forming hotlines and outreach programs for victims of the anti-gay crackdown in Chechnya and surrounding regions. They noted that GayRussia.ru was not participating.

So where, alas, did the New York Times coverage diverge from Novaya Gazeta’s? As I said earlier, they did bring up in this article and others that the Chechnya crackdown was sparked by Nikolai Alekseyev’s gay parade petitions. But if that’s all you knew, you’d assume he was a gay activist with the same progressive politics as any gay pride parade activist in Europe. And you’d assume, therefore, he’s the good guy in this story.

And since every story involving Russia needs a bad guy, you can probably guess who the New York Times pinned this on. Here’s a hint: Pinning everything that’s gone wrong in the world on Vlad The Bad just won the Times a Pulitzer. Why mess with a winning formula?

Riding the “Chechen Gays” scandal on a Unicorn

Riding the “Chechen Gays” scandal on a Unicorn
...
In spite of Chechen law enforcement being the main aim of the scandal, I am convinced that the true target of this orchestrated psy-op is the FIFA Football Championship that is scheduled to take place in Russian in June 2018.

Just like back in 2014 Winter Sochi Olympic Games became a target for “gay rights” activists in the West, who protested days before the Winter Olympics was scheduled to begin in the southern resort of Sochi.

Remember all those calls for boycott of the Sochi Games because of the Russia’s law prohibiting gay sex propaganda to children?

The 2018 FIFA World Cup championship in Russia fast approaching with the set dates from June 14, 2018 to July 15, 2018. Naturally, to poison this festive and peaceful sports event an old homosexual card is being played once again, since there is still time to prey this championship from the Russian hands.
...
http://thesaker.is/riding-the-chechen-gays-scandal-on-a-unicorn/